The french tarot,  Bourgeois Tarot   tarot nouveau is the tarot deck which is used in france ( and sometimes denamark) today, for gaming, as opposed to divinatory uses. It may be found in all types and qualities, from ones printed on cheap pastebboard, to those with gilt edges. This is surprising, give that the design is said to have been inspired by ones made in germany....
The french tarot is identical in structure with the Italian tarot ( see http://anthonylesq.blogspot.com/2011/11/on-tarot.html)
Note the following;

I- the cards are french suited , using spades, hearts, clubs and diamonds instead of the italan suits of swords, batons, coins and cups.
II the cards have indexes, with V for the valets =jacks, C for chevaler = cavaliers,  D for Dame = Queen and R for roi = king 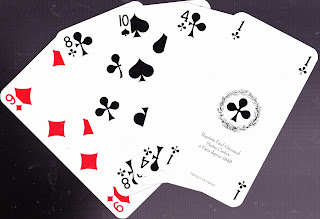 Some pip cards
For part II, dealing with the trumps, see;
http://anthonylesq.blogspot.com/2012/02/french-tarot-grimand-part-ii.html
Posted by Anthony L . at 00:04