"2001 龙凤四色牌”  112c +7
This particular deck of playing cards is yet another variation of the 四色牌, playing cards, or as some English authors call them "chess cards" . The Chinese name reflects the suit system of the cards. Four colours, Red, Yellow, Green and White. The English name reflects the ranks in each of the suits, which correspond to the pieces in the Chinese version of Chess.

Although purchased in Singapore, this particular pattern is not common there. In all my years of collecting, I have only seen this pattern twice. On both occasions I bough the decks in question.
For a Comparison with a more typical pattern, please see http://www.wopc.co.uk/singapore/double-elephant  and http://anthonylesq.blogspot.sg/2013/03/four-colour-cards-hokkien.html 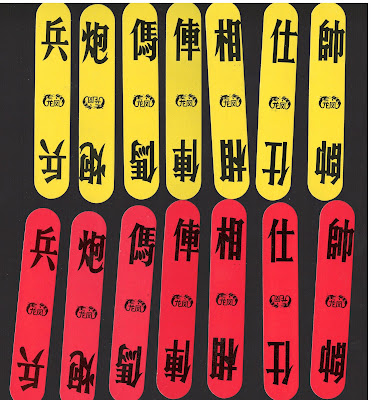 The red and yellow suits. The ranks are, From Right to Left: General 帥,Guard 仕, Minister相,  Chariot俥, Horse 傌, Cannon 炮, and Infantryman. 兵
Despite being printed in the PRC, these cards are written in Traditional Chinese characters. Also note the company name (龙凤, "Dragon and Phoenix"）written in the space between the cards. 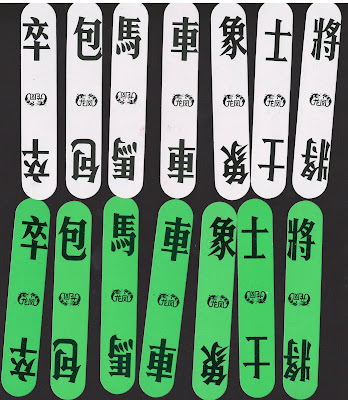 The Suits of Green and White. Like real Chinese chess sets, ( see here and Here ) The pieces for opposing sides are written using different characters. The ranks are, Again, General 將,Guard士, Elephant 象 (The Chinese words for "Elephant"and "Minister" are homophones, hence the substitution ) , Chariot 車, Horse馬, Cannon 包.(Amusingly, this character on its own means "Bun").and soldier. 卒 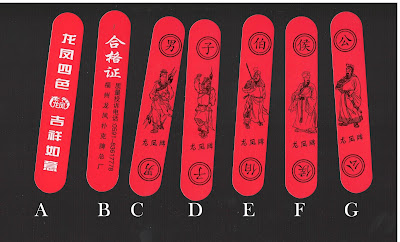 The "Title cards" (A, B) and the five "Jokers (C-G). The text on card A gives the name of the company, and an auspicious greeting. Card B is a Quality control certificate. (合格证). It also gives the " complaints hotline". The card informs us that the company is located in Fuzhou.

. The jokers ( C, D, E, F, G)  are slightly more cryptic. They apparently refer to ranks of the Chinese Nobility. EDIT: The jokers depict the five ranks of  ancient Chinese nobility mentioned in the Book of rites.  In descending  order of rank, they are 公 (G)、侯(F)、伯(E)、子(D)、男(C).
In any case, the games that are played with the deck do not appear to use them. 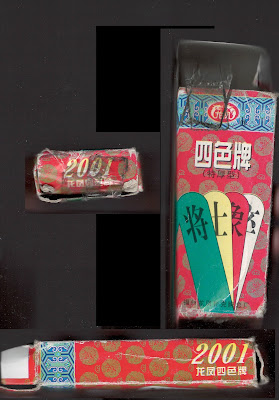 The box. You can see it is fairly battered.