Having featured the playing-cards of Nantong, I shall now describe a game played with them. My main sources are the Chinese Baidu and Wikipidia articles , along with Hu Baishen胡柏生 and Du Guoyuan杜国元's  book Nantong long-cards-- Talking about Dazihe (Nantong Changpai-- Hua shuo dazihe 南通长牌-- 话说搭子和). published by The People's literary and artistic publishers  (dazong wenyi chubanshe) 大众文艺出版社. This book will be referred to as H&D.

The game goes under several names. The Baidu article calls it“Duzi Hu" 笃子胡. H&D call it Dazi hu, 搭子和. This is the name used in Rugao city, also in Nantong.

Equipment: One deck of Nantong playing-cards. Readers without access to such cards can substitute a Mahjong set, or use ordinary playing cards, as explained below

Players This is a game for four people. However only three play each hand. The player who deals the cards sits out. The dealer for the first round is selected by lot. H&D suggest using four playing cards, Ace, 2, 3, and 4. The one who gets 4 will become the dealer, and sit out. The player who drew the ace is the "Banker" 庄家. He plays first, followed by the players who drew the 2 and 3. The deal then rotates counterclockwise.

Deal The cards are shuffled and dealt. The banker is dealt 23 cards, the rest of the players are dealt 22. Once the deal is completed,  The next two cards of the stock are turned up. These are the 将牌, literally "General cards" . The cards are examined.

Melds with these cards affect the scoring [...]

Declarations: The players first inspect their hands. If they contain either
a) A four-of-a-kind
b) Sufficient General cards to make a pong or Gong [ see "Melds" ] with the turned up general. E.G. If a 5 of coins was turned up as a General, and a player's hand contains two 5 of coins, He can declare them, and receive extra points.

The "Banker" inspects his hand, and chooses to discard a card. [or declare a meld] The second player then draws a card from the stock, [declare any melds], and then discards another card. The card discarded does not have to be the same as the one drawn. The process repeats itself, until someone has successfully melded off his hand. This is called 胡

These melds are similar to that in Mahjong. [H&D]

2 )刻子Ke zi ” Cut ones" and 坎 "Kan" -- "Pong"
In Mahjong, called a Pong. These refer to three cards, identical in suit and rank. E.G.  Three 5 of coins, or three 7 of strings.  Three cards of the same rank, but different suits are not considered a meld. The player can gain the cards by drawing from the stock. If he has a pair of cards, and another player discards the third card, a pong can also be made
A Pong involving the General cards is called 底插-- Di Cha


杠--Gang "Gong"
A four-of-a-kind. Can be obtained through drawing from the stock, or having a pong, and another player discarding the fourth card.


Scoring table:
The column headed "Meld" describes the meld. Each meld is split into two rows. The top row shows what the cards score if they are normal cards; the bottom row if they are General cards. Each of the columns that intersect it show the score each meld obtains, depending on the situation with the General cards. 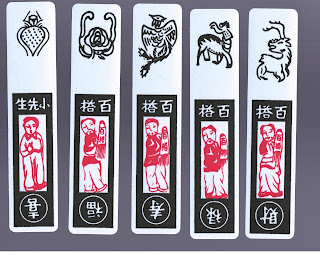 The Jokers of the Nantong Deck.

Play with jokers: Most Nantong decks come with five jokers.  The Jokers are not strictly necessary for play,and are not usually used. They function exactly like "Flowers" in mahjong. If a player is dealt jokers, or receives them from the stock, he exposes them, and draws replacements from the stock. He also gains bonus points. If the jokers are turned up as the general cards, then the scores are doubled. "The jokers can only be used when all four players agree to do so" [H&D]

Play ends when a player has successfully melded off his entire hand, or when the stock runs out. A completely melded hand has 23 cards, consisting of a pair of identical cards, plus a number of melds. It can be done one of three ways

If the stock is exhausted without anyone melding off their hand, the game also ends. The hands of all the players are exposed, and the scores of each player reckoned. Such a situation is called 黄牌 Huang2 pai - Yellow cards, or 谎牌 Huang3 Pai -- Lying cards.

Scoring
The score of the winner's hand is tabulated according to the table above.
If the player has a "clear game" [i.e. no special combinations or multipliers...


Substitutes:
If the reader has access to a set of mahjong tiles, he can easily adapt them to this game. This is done by removing the winds, flowers, and if desired, all but five of the jokers

A substitute can also be made using four decks of western playing-cards.  Remove the court-cards of all the suits. Remove the suit of hearts, both courts and pips. Do the same for the remaining 3 decks. The ace to Nine are used to replace the 1-9 of each of the three suits . The Tens of each suit replace the  White Flower, Red Flower and Thousand Children. Add jokers if desired.

On Tarot and divination decks: Part 2

As long-term readers of my blog may know, I used to take a rather dim view about the use of playing cards as instruments of divination. Recently, my attitude towards this has softened.

The fact that tarot was invented as a means of amusement,  this does not mean it is an an illegitimate method of divination. People have been divining using all sorts of things- thunder, stars, animal entrails, coins, the output of random number generators, etc. One can hardly say the stars were invented for the purposes of divination, but yet many people use them as such, and indeed, if we believe them, gain great meaning from doing so.

Further, these divinatory meanings traced in their instruments. Consider tarot. Cards are interpreted differently, depending if they are upright or reversed. As such, this means all modern divinatory tarot decks are produced in such a manner that they are single-faced. In turn, many of the tarot pips are made in what are other contexts called 'transformation' cards; the particular figures on each card corresponding to the card's divinatory meaning

Thus, just as much as collectors of playing cards should be aware of the games that these cards are used to play, they also ought to pay attention to the manner in which the cards are used for divination.

Update 2: Hiatus, regular posting is to be ceased indefinitely

This blog has been around for nearly a decade, but alas, For various personal reasons, I doubt if I am able to maintain this blog for much longer; the monthly posting schedule is unlikely to be resumed.

Posts will still come, however they are unlikely to be on any regular schedule

Email ThisBlogThis!Share to TwitterShare to FacebookShare to Pinterest
Labels: self

This account has been running for a decade now. Unfortunately for personal reasons, I had to suspend my monthly posts, and  must suspend my posting schedule from now until about July- August

Email ThisBlogThis!Share to TwitterShare to FacebookShare to Pinterest
Labels: self

Some years ago I made assertion that there is only one form patience that has a use as a fortune telling method. https://anthonylesq.blogspot.com/2013/08/oracle-patience-two-descriptions.html

I am evidently wrong.

This unusual form of card divination that I feature here can be found on p 30 of Muhammed Ali's "Telling fortunes by cards" [Cartlon B Case] as method D. It is a curious cross between a game of patience and a divination method, specifically, the very simple form of patience  sometimes called "Roll call" or "Hit or miss". Here is a video showing how you play it:  https://www.youtube.com/watch?v=SMTJtLrH6WE (I recall reading a book saying that this form of patience, without the divinatory function, is the most efficient waster of time after television--)

Below is shown the original text of the work, taken from https://archive.org/details/tellingfortunesb00case/page/30/mode/2up . Another version can be found here https://www.gutenberg.org/files/42008/42008-h/42008-h.htm#Page_30 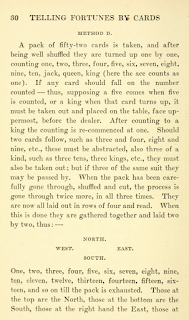 The instructions, are in summary:

- each  pile is read is an indication of the future. North represents the most immediate future, followed by South, then East, then west,

- Carter provides two sets of meanings, one "ancient' and another  "modern" for each card of the 52 card pack.

- Of the two the modern seems to be suited to this method; most of the ancient meanings are directly related to marriage.

Astute readers would note that this method does not answer specific questions (eg "will i get a job"?) , but rather general open ended readings about what would happen in the future, probably about a week or so.

Regarding the ancient and modern meanings of the cards,  (pp 12 and 20, respectively) they too are worth commenting upon. Consider the auspiciousness of the suits: In the ancient system, the suits are ranked thus:

But, in the modern system, Case reverses the auspiciousness of clubs and diamonds,  so diamonds (representing wealth) are more auspicious than clubs, which are reinterpreted as "business matters". Those with a marxist bent would clearly see the stamp of capitalism on this matter-- wealth literally trumping relatonships...

"Lad" pattern, 童子, anon 128 cards, namely
3 suits
9 cards each suit + 3 extra
4 copies of each of the above;
to which are added
additional 8 cards
.
A deck of money-suited cards purchased in China. They are made of plastic, and have square corners.

The suit of coins, on the left, the ace, and so on till the 9; the penultimate card on the right
Notice the delightfully careless way the 8 of coins is arranged
The leftmost card [i.e. the one with the red stripe is the 白花, White Flower]

The suit of strings. As you may have noticed, these cards have scoops in the top, which serve as indices
the 9 of coins is also arranged in a delightfully careless manner
The leftmost card is what appears to be a bonus; he has a red X on his chest

The suit of myriads. The faces are rather mask-like. The 8 of myriads has a small dab of coloir on his head. 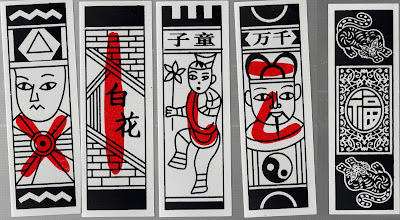 The fouur bonus cards on the deck.
The third card from the left, depicting a standing figure, is the 童子, or boy
The fourth card from the left, with two red squiuggles is the 千萬, thousand myriad
The back depicts the word 福, prosperity
Posted by Anthony L . at 21:11 No comments:

The suit of coins. As you can see, the first unusual feature of this deck is its colour: It is printed in on a yellow background. Ace is on the left, and the 9 is the penultimate card on the right. The 2 of coins contains the word 成, "Complete".
The rightmost card is akin to the "Dragons" in Mahjong. Its name is 代宗, one of the emperors of the Tang dynasty,

The suit of strings. On the left is the ace of strings, which has been depicted as a fish, hence the patern;s name. Notice the marks in the black portion of all the cards; these are the indices. For example, all the aces have a scoop cut on the left, the 2s have a circle, etc. Unlike other decks of money-suited cards, the markings here do not change with the suit.
The bonus card [rightmost card] depicts Wu Song 武松, one of the heroes of the Chinese novel The water Margin  水浒传.

The suit of myridads.Each depicts a human visage, and is named after a character of the Water Margin, The 8 of myriads is not named, and instead marked with 福 meaning Luck. The extra card  [2nd from the right] is labelled 刘唐
The back is shown as the rightmost card, The central motif is again the character Fu, meaning luck.