Four colour cards, or Si sek pai as they are known in hokkien, are a form of playing card used in china and a great part of S/E asia. These cards are used to play a game much like rummy.


As the name of the deck implies, there are four suits, which are represented by the background colours of the cards. Each of the suits consists of seven subjects, taken from the ranks of a chinese chess ( Xiangqi) set.  The characters are written slightly differently for each side, and this difference is reflected in some decks, like this one. They are:

Thus making a unit o﻿f 28 cards. Four units are united together to form a full deck of 112 cards.

Now, the deck we have here is a smoewhat remarkable preservation- Such cards have been extinct in singapore for the past 30 or so years. This example is very old stock, which was somehow preserved in a chinese art supplier's back room,  from the properiteror's previous busisness as a game mearchant. 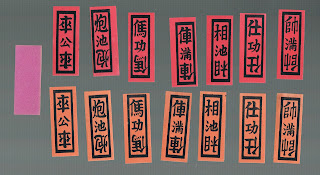 the red & yellow suits, and the back

As you can see, the cards are much shorter than the ones usually seen today. ( see ---) .
Also note the characters. Like the chess sets, they are written differently for each of the suits.
My grandaunt informs me that the sets are more or less identical to the cards of her youth, the only difference being that these cards are slightly shorter. 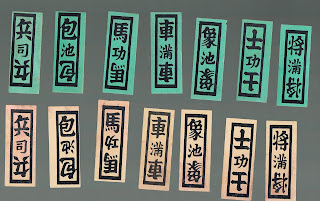 The green & white suits. The white suit appears pink due to the dye from the backs rubbing off on the paper

Another feature you may have spotted is the chinese charaters in the center of the card. I have yet to decipher their meaning, but they may be the company's name
Posted by Anthony L . at 08:11